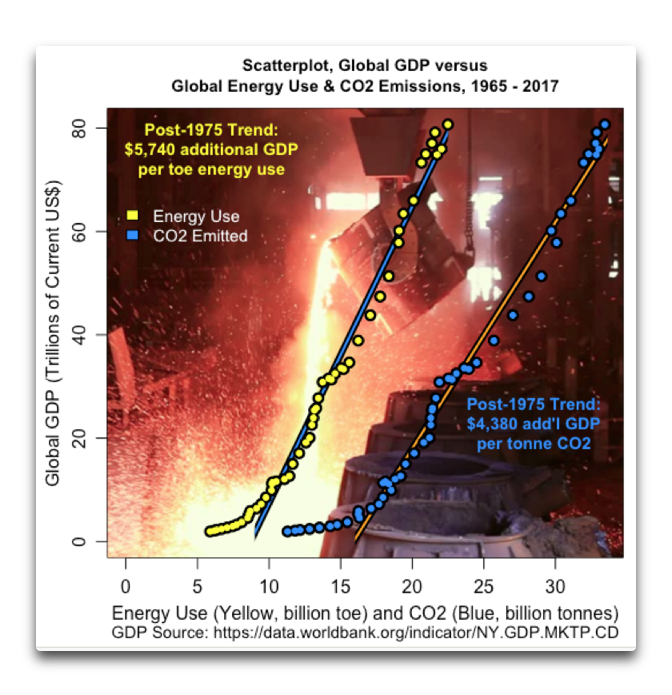 … the dollar value of the total damages from emitting one ton of carbon dioxide into the atmosphere. The current central estimate of the social cost of carbon is roughly $40 per ton.

Willis Eschebach writing in WUWT notes that this definition is only half the analysis because it completely ignores any social benefit of CO2 emissions, intentionally committing scientific malfeasance.  The social benefit of carbon would parallel the cost definition and would be the dollar value of the total benefits from emitting one ton of CO2 into the atmosphere.  CO2 emissions generally come from the use of fossil fuels, so a comparison based on a barrel (bbl) of oil, around $51/bbl in this analysis is as good a place as any to start.  For instance, we here in the US do subsidize various forms of energy preferentially.  Oil is subsidized at $0.26/bbl, coal at $0.38/bbl, nuclear at $2.58/bbl, and renewables of all forms at a whopping $28.42/bbl, over half the cost per barrel equivalent energy generated.  Many states like California tack on additional costs like carbon taxes and renewable mandates.  Yet with all that help, renewables are still less than 3% of global energy production.  And the taxpayers are starting to get tired of paying that bill (see the Yellow Vest Protests in France).  Energy is inextricably linked to economic development, with the global Gross Domestic Product a simple linear function of how much energy we use.  In other words, our wealth is simply a function of how much energy we can command.  As the population increases, the only way to make ourselves, our neighbors, and more importantly poorer nations wealthier is to use more energy and use it more efficiently.  In 1965, half a century ago, for every barrel of oil equivalent energy we used, we got about $50 worth goods and services.  Half a century later, that total is up to $500, an order of magnitude improvement.  And because we are using generally more fossil fuels over the last century, there is a direct and simple relationship between more energy produced and more CO2 produced.  Do the math and you end up with $5,740 in additional goods and services produced for each ton of oil equivalent used.  For each additional ton of CO2 produced, we get an additional $4,380 in additional goods and services.  Compare the results.  If the social cost of CO2 is around $40/ton and the social benefit of CO2 is $4,380, then by definition, CO2 is not the problem.  Rather, it is the solution and we need more of it.  Note that this analysis does not include the positive impact of greening the planet due to CO2 emissions.  https://wattsupwiththat.com/2018/12/15/the-social-benefit-of-carbon/